Use the deploy resource to manage and control deployments. This is a popular resource, but is also complex, having the most properties, multiple providers, the added complexity of callbacks, plus four attributes that support layout modifications from within a recipe.

For example, an application that is deployed to a folder named "/path/to/application":

For the example shown above:

The full syntax for all of the properties that are available to the deploy when used with git is:

and the full syntax for all of the properties that are available to the deploy when used with Subversion is:

In the deploy directory, a sub-directory named shared must be created. This sub-directory is where configuration and temporary files will be kept. A typical Ruby on Rails application will have config, log, pids, and system directories within the shared directory to keep the files stored there independent of the code in the source repository.

A deployment happens in four phases:

The chef-client uses a cache file to keep track of the order in which each revision of an application is deployed. By default, the cache file is located at /var/chef/cache/revision-deploys/APPNAME/. To force a re-deploy, delete the deployment directory or delete the cache file.

In-between each step in a deployment process, callbacks can be run using arbitrary Ruby code, including recipes. All callbacks support embedded recipes given in a block, but each callback assumes a shell command (instead of a deploy hook filename) when given a string.

The following callback types are available:

Each of these callback types can be used in one of three ways:

Within a callback, there are two ways to get access to information about the deployment:

Both of these options must be available at the top-level within the callback, along with any assigned values that will be used later in the callback.

The following example shows where callbacks fit in relation to the steps taken by the deploy process in Capistrano:

and the following example shows the same comparison, but with the deploy:migrations process: 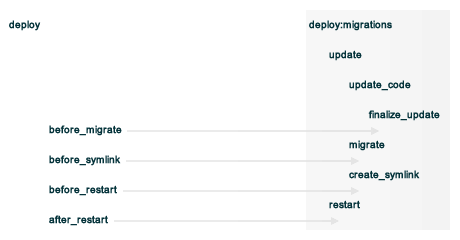 This resource has the following actions:

:deploy
Default. Deploy an application.
:force_deploy
Remove any existing release of the same code version and re-deploy a new one in its place.
:nothing
Define this resource block to do nothing until notified by another resource to take action. When this resource is notified, this resource block is either run immediately or it is queued up to be run at the end of the chef-client run.
:rollback
Roll an application back to the previous release.

For example, a simple deployment:

This resource has the following properties:

A block of code, or a path to a file that contains code, that is run after restarting. Default value: deploy/after_restart.rb.

A block of code, or a path to a file that contains code, that is run before a migration. Default value: deploy/before_migrate.rb.

A block of code, or a path to a file that contains code, that is run before restarting. Default value: deploy/before_restart.rb.

A block of code, or a path to a file that contains code, that is run before symbolic linking. Default value: deploy/before_symlink.rb.

The alias for the revision.

Create directories in the release directory before symbolic links are created. This property runs after purge_before_symlink and before symlink. Default value: %w{tmp public config} (or the same as ["tmp", "public", "config"]).

The “meta root” for the application, if different from the path that is used to specify the name of a resource. Default value: the name of the resource block See “Syntax” section above for more information.

A Hash of environment variables in the form of ({"ENV_VARIABLE" => "VALUE"}). (These variables must exist for a command to be run successfully.)

The system group that is responsible for the checked-out code.

Continue running a recipe if a resource fails for any reason. Default value: false.

The number of releases for which a backup is kept. Default value: 5.

A string that contains a shell command that can be executed to run a migration operation.

The syntax for notifies is:

An array of directories (relative to the application root) to be removed from a checkout before symbolic links are created. This attribute runs before create_dirs_before_symlink and before symlink. Default value: %w{log tmp/pids public/system} (or the same as ["log", "tmp/pids", "public/system"].

The alias for the repository.

The URI for the repository.

The name of the sub-directory in which the pristine copy of an application’s source is kept. Default value: cached-copy.

A string that contains a shell command that can be executed to run a restart operation.

The number of times to catch exceptions and retry the resource. Default value: 0.

A branch, tag, or commit to be synchronized with git. This can be symbolic, like HEAD or it can be a source control management-specific revision identifier. Default value: HEAD.

Roll a resource back to a previously-deployed release if an error occurs when deploying a new release. Default value: false.

A resource may listen to another resource, and then take action if the state of the resource being listened to changes. Specify a 'resource[name]', the :action to be taken, and then the :timer for that action.

The syntax for subscribes is:

Map files in a shared directory to their paths in the current release directory. This property runs after create_dirs_before_symlink and purge_before_symlink. Default value: {"system" => "public/system", "pids" => "tmp/pids", "log" => "log"}.

Map files in a shared directory to the current release directory. The symbolic links for these files are created before any migration is run. Use parentheses ( ) around curly braces { } to ensure the contents within the curly braces are interpreted as a block and not as an empty Hash. Set to symlink_before_migrate({}) to prevent the creation of symbolic links. Default value: {"config/database.yml" => "config/database.yml"}.

The amount of time (in seconds) to wait for a command to execute before timing out. When specified, this value is passed from the deploy resource to the git or subversion resources.

The system user that is responsible for the checked-out code.

The following properties are for use with git only:

The depth of a git repository, truncated to the specified number of revisions. See shallow_clone.

The alias for the ssh_wrapper.

The remote repository to use when synchronizing an existing clone. Default value: origin.

Set the clone depth to 5. If a depth other than 5 is required, use the depth property instead of shallow_clone. Default value: false.

The path to the wrapper script used when running SSH with git. The GIT_SSH environment variable is set to this.

The following properties are for use with Subversion only:

The extra arguments that are passed to the Subversion command.

The user name for a user that has access to the Subversion repository.

Generally, it’s best to let the chef-client choose the provider, and this is (by far) the most common approach. However, in some cases, specifying a provider may be desirable. There are two approaches:

This resource has the following providers:

The deploy_revision provider results in deployed components under the destination location that is owned by the user who runs the application. This is sometimes an issue for certain workflows. If issues arise, consider the following:

When using the deploy_revision provider, and when the deploy fails for any reason, and when the same code is used to re-deploy, the action should be set manually to :force_deploy. Forcing the re-deploy will remove the old release directory, after which the deploy can proceed as usual. (Forcing a re-deploy over the current release can cause some downtime.) Deployed revisions are stored in (file_cache_path)/revision-deploys/(deploy_path).

Modify the layout of a Ruby on Rails application

The layout of the deploy resource matches a Ruby on Rails app by default, but this can be customized. To customize the layout, do something like the following:

Use resources within callbacks

Using resources from within your callbacks as blocks or within callback files distributed with your application’s source code. To use embedded recipes for callbacks:

Deploy from a private git repository without using the application cookbook

To deploy from a private git repository without using the application cookbook, first ensure that:

and then remove a passphrase from a private key by using code similar to:

Use an SSH wrapper

To write a recipe that uses an SSH wrapper:

The code in a file that is included in a recipe using a callback is evaluated exactly as if the code had been put in the recipe as a block. Files are searched relative to the current release.

To specify a file that contains code to be used as a block:

Use a callback to pass a code block

To pass a block of Python code before a migration is run:

Use the same API for all recipes using the same gem

Any recipes using the git-deploy gem can continue using the same API. To include this behavior in a recipe, do something like the following:

Deploy without creating symbolic links to a shared folder

To deploy without creating symbolic links to a shared folder:

When deploying code that is not Ruby on Rails and symbolic links to a shared folder are not wanted, use parentheses () or Hash.new to avoid ambiguity. For example, using parentheses:

Using the default property values for the various resources is the recommended starting point when working with recipes. Then, depending on what each node requires, these default values can be overridden with node-, role-, environment-, and cookbook-specific values. The deploy resource has four layout modifiers: create_dirs_before_symlink, purge_before_symlink, symlink_before_migrate, and symlinks. Each of these is a Hash that behaves as a property of the deploy resource. When these layout modifiers are used in a recipe, they appear similar to the following:

and then what these layout modifiers look like if they were empty:

To clear the default values for a layout modifier:

In general, use this approach carefully and only after it is determined that nil or empty values won’t provide the expected result.

© Chef Software, Inc.
Licensed under the Creative Commons Attribution 3.0 Unported License.
The Chef™ Mark and Chef Logo are either registered trademarks/service marks or trademarks/servicemarks of Chef, in the United States and other countries and are used with Chef Inc's permission.
We are not affiliated with, endorsed or sponsored by Chef Inc.
https://docs-archive.chef.io/release/12-13/resource_deploy.html