RethinkDB client drivers are responsible for serializing queries, sending them to the server using the ReQL wire protocol, and receiving responses from the server and returning them to the calling application. This process takes the following steps:

For updates on protocol and behavior changes in new versions of RethinkDB and general assistance with writing drivers, join the RethinkDB-Dev Google Group.

ReQL types and commands are defined in the ql2.proto file.

The ql2.proto file is well-commented, showing arguments and output for each command.

Open a TCP connection to the server on the driver port. The default port is 28015.

With version V1_0 of the protocol, the handshake protocol has changed from previous versions.

Note: It is possible to optimize the handshake by sending message #3 immediately after #1 without waiting for the server response, and read messages #2 and #4 afterward, handling them as appropriate.

Note: these versions do not support RethinkDB users and permissions, and may be deprecated in a future release. When communicating with RethinkDB 2.3 or later, the authentication key will be compared to the admin user account password.

The server will respond with a null-terminated ASCII string describing the result of the handshake. If the string is "SUCCESS", the client may proceed to stage 2 and begin sending queries. Any other string indicates an error. The server will close the connection, and the driver should report this error to the user.

Your driver should assign each query a unique 8-byte token per connection. (The official RethinkDB drivers implement this as an unsigned 8-byte little-endian counter per connection.) The server will send responses to queries using this token as an identifier so the response can be matched to its query. The token can also be used to request more data for the query if all the results were not returned in the first response.

The next section will explain how to build complex queries. For now, we will just send the string "foo" (r.expr("foo")) to the server.

Sending a query to the server takes the following steps:

The wrapped query message sent to the server is an array of three elements:

The next section will go into more detail, but in our example the QueryType is 1 (or START, as we’ll see later), the query is simply the string "foo" and there are no options.

So, the data we send to the server is as follows:

When you parse the response string as JSON, you get the object:

ReQL is a domain specific language expressed in the host language. The three official drivers follow a very similar syntax; you should stick to that model as closely as your chosen language allows. Typically you are free to use either a prefix or infix notation, or mix the two.

Internally, queries are represented as trees. A query of:

is represented by this tree: 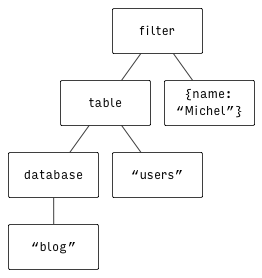 ReQL commands are represented as a list of two or three elements.

Thus, this is how our previous query is represented:

You can only check arity of the methods to a certain extent. If an ARGS term is one of the argument, only the server can effectively verify that enough arguments are provided (or not too many). The arity errors reported by the server suppose a prefix notation. Things may change if the solution in #2463 is implemented.

A datum (the singular of data) is any value that can be represented in JSON: booleans, numbers, strings, objects, arrays and null. They are sent to the server in JSON form.

Arrays, however, are a special case: since ReQL commands (as described above) are sent as arrays, you must send data arrays as arguments to the MAKE_ARRAY command. So the array

Would be sent to the server as

Some native ReQL data types have no direct JSON representations. These are implemented as pseudo types, JSON objects with the special key $reql_type$. The three official ReQL drivers convert date and binary types to pseudo types.

The epoch_time field is a Unix timestamp, the number of seconds since January 1st, 1970, with millisecond precision. The timezone field is a string in the format [+-]HH:MM, indicating the offset from UTC. UTC is +00:00; PST is -08:00; and so on.

The data field is a Base64-encoded string of the binary object.

When the driver finds an anonymous function, it returns a query object like this one:

The parameters are represented as values <p1>, <p2>, etc.; the values are arbitrary, but must be unique per query to avoid collisions. Within the function body the values are referred to with the query term VAR, defined as 10 in ql2.proto. So the value of parameter 1 is retrieved with [10, [1]].

The function would be serialized as:

Serializing functions depends heavily on your driver’s language. The JavaScript driver does it this way:

If your driver uses infix notation, you must make sure that the VAR term implements all the ReQL methods.

The IMPLICIT_VAR term is equivalent to the row command in the official JavaScript and Python drivers. It’s useful for languages where anonymous functions are too verbose.

If you do not find one, treat the argument normally.

In the case of nested functions, the IMPLICIT_VAR term is ambiguous, and should not be used. Your driver should either throw an error or let the server return an error.

Binary objects created with r.binary can be serialized in two different ways.

If the argument is a ReQL term (not including a datum), serialize it using the standard term:

If the language’s native binary format is used, use the pseudotype serialization described above.

The r.do() command is serialized with the FUNCALL term.

Take the do command:

This would be serialized as:

Because you can keep chaining commands (or calling them in prefix notation), you need a command to signify the end of the chain and send the query to the server. This command is run in the official drivers.

Once the run command is processed, the serialized query needs to be wrapped in the message sent to the server. The complete message takes the form:

The query types are defined in ql2.proto. When a query is first sent to the server, it will be sent with a QueryType of START (1). The options (sometimes referred to as “global optargs”) are options passed to the run command itself; see the run documentation for a complete list. (Commands sent to the server are snake_case, not camelCase.)

The full list of QueryType values is as follows:

CONTINUE and STOP should be sent on the same connection with the same token generated for that query’s START message.

To recap, sending a query to the server takes the following steps:

So, our initial example query of:

is sent as follows on the wire:

If the db option is passed to the run command, its value must be a DB term. The query:

should be sent as as if the argument to db was r.db("blog"):

Responses from the server take the following form:

The Response object will have the following fields:

These will be numeric values, corresponding to the types in ql2.proto.

The n field, if present, will be an array of one or more ResponseNote values, giving further information about the kind of the stream being returned. These will be numeric values, corresponding to the notes in ql2.proto.

All of the response notes involve changefeeds; read Changefeeds in RethinkDB for more detailed information.

To retrieve more data for the cursor, the driver should send a query with a QueryType of CONTINUE on the same connection with the same token. As with other queries, this must be sent with the query token, the size of the query, and the query itself, simply [2].

You will receive another response of either type SUCCESS_PARTIAL, indicating there is still more data available, or SUCCESS_SEQUENCE if you have reached the end of the stream. (This will never be returned for a feed.) Note that these ResponseTypes can be returned without data (an empty array as the r value). A driver can send CONTINUE to fetch the next batch of a sequence as soon as the response is received.

To close a cursor and stop receiving data from the stream or feed, send a query with a QueryType of STOP on the same connection with the same token.

Starting with RethinkDB 2.0 (V0_4), the server will process multiple queries in parallel rather than sequentially, and there is no guarantee that a read following a write on the same connection will “see” the results of the write as long as it’s successful. (Previous versions of the server would process multiple queries on the same connection sequentially.)